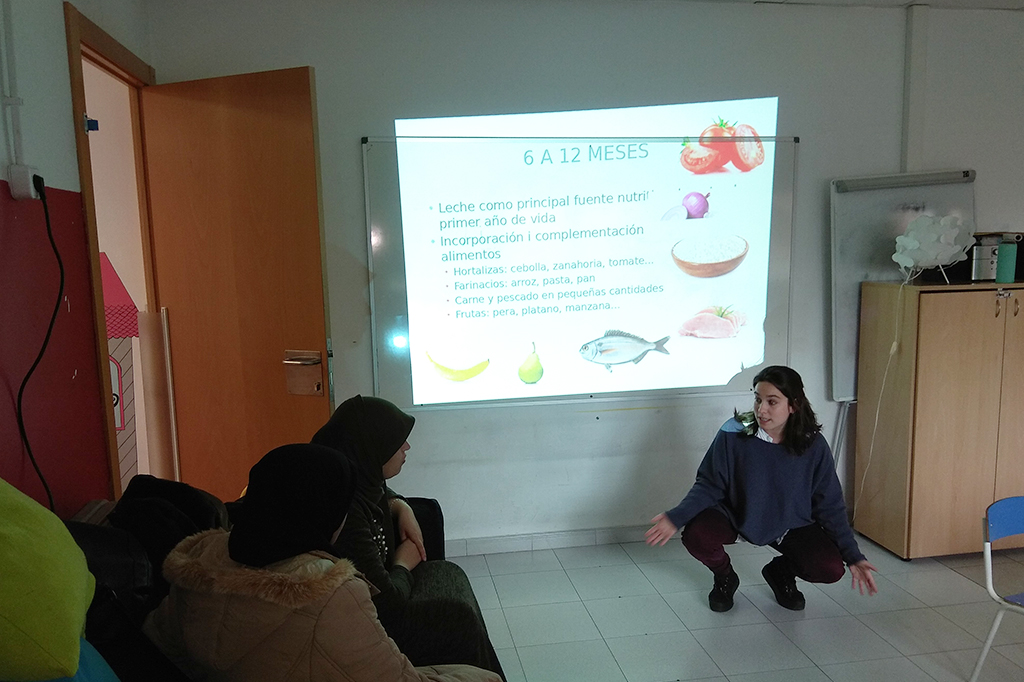 Early Childhood Nutrition: From Age 0 to 3

Two tips: 1) Set an example and 2) Offer healthy foods. With these words Probitas Foundation dietician and nutritionist Elisabet Solà began the workshops on healthy habits.
The workshops on healthy habits are integrated into the RAI/CNR (Children's Nutrition Reinforcement) programme, as part of the RAI/CNR-Meriendas (Snacks) effort, along its training intervention line. Each of the sessions lasts for one hour and the main topics addressed are the following:

When the session ends there is a time reserved for a Q&A with the workshop's leader. The total number of workshops already offered so far (sessions attended by mothers and fathers, with their children ages 0 to 3) has been 9 (5 workshops carried out during 2017, and 4 this year).

The workshops take place at "open collaboration centres" of Probitas Foundation, like the Asociació Educativa Can Palet (Terrassa), Esplai Eixida Camps Blancs (Sant Boi de Llobregat), Asociació Compartir (Rubí) and Ceps Proyectes Socials (Mollet del Vallès), among others. In the latter several mothers participated who have visited the centre for more than 2 years. For all of them it was the first time they attended a workshop on healthy eating for the children in their homes. Specifically, Hannane, a Moroccan mother who takes her 4 children to the open centre, has shown much interest in the culinary techniques explained during the workshop, and concern about the best way of acting when her children do not want to eat. She asked the workshop leader if it is necessary to force them to eat everything they are served. Solà replied that when a child refuses to eat, it is no cause for alarm, as this often happens when new foods are introduced. They must be given some time, which varies with each child, for their bodies to get used to the new flavours being introduced into their diets. Hannane was also very participative during the workshop, not only asking questions, but also helping to translate some words for the rest of the group not as familiar with the language.

All the mothers attending the workshop were very happy with the techniques taught and guidance given during the session. Some, like Hannane herself, realised that there were certain foods she was giving her children that were not entirely healthy, given their ages. The workshop is positive and, above all, very enriching for the families that attend, explains Hannane.

Before the session the workshop leader handed out a sheet to each mother with possible menu ideas, to make it easier for them to combine healthy foods during the first months of their children's lives. During this time all the participants (who at first were very timid) took the opportunity to ask the nutritionist questions about the topics discussed during the workshop.

Open centres
Open centres are as, as described by the FEDAIA (Federation of Entities for Attention to Children and Adolescents) protective spaces that offer attention to children, adolescents and their families. They also harbour an educational and preventive mission through specialised social education during children's and adolescents' leisure time. Through this educational and preventive action personal processes are impacted in a comprehensive manner.