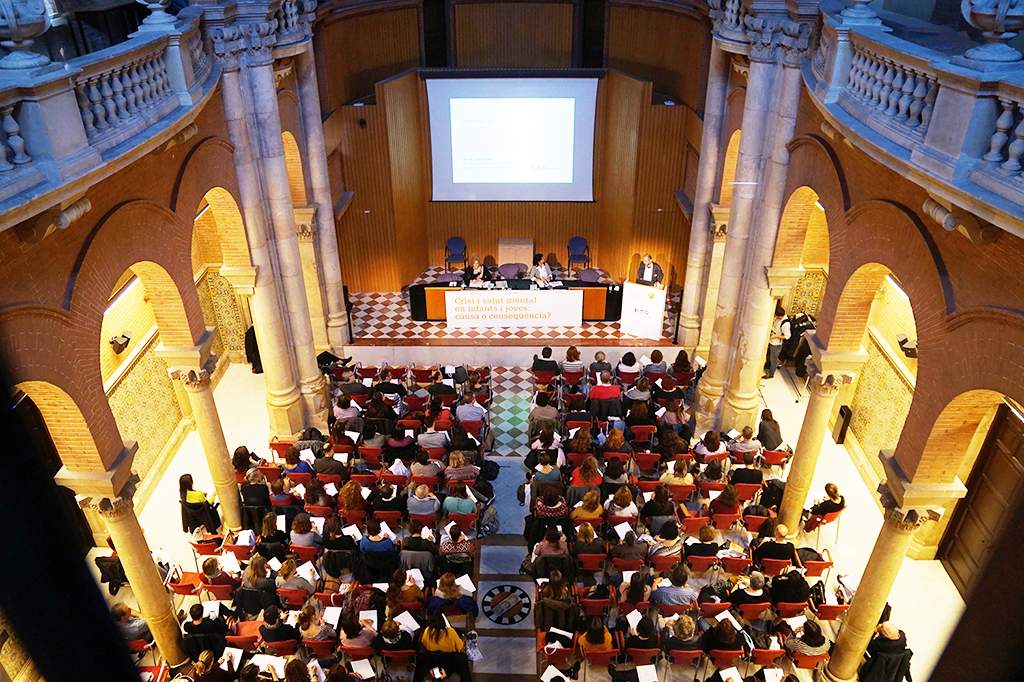 The Probitas Foundation and the Víctor Grífols and Lucas Foundation held a debate on the impact of the economic crisis on the mental health of children and adolescents last 21st of November.
The experts who met at the event organized by the Probitas Foundation and the Victor Grífols and Lucas Foundation agreed to highlight the importance of treating the mental health of young people and children as a priority. Not only for the impact it may have on their adult lives, but also on society in general. The professionals also claimed for more coordination between the educational, social and health areas to provide children, young people and their families with a more effective and comprehensive help and support.
The prestigious neurologist Jorge L. Tizón talked on how the political/economic crisis affects children's mental health. In particular, he pointed that one of the key elements are the "scam cuts", since, according to Tizón, these cuts helped to spread the idea that the policies of prevention and policies for children in times of crisis are dispensable. In front of this situation, the neurologist alert that these children and young people can be adults with mental health difficulties and with brain and labor problems. Problems that pass from generation to generation.
On the other hand, Luis Rajmil, researcher at the Agency for Quality and Evaluation of Health of Catalonia (AQUAS), emphasized that children and young people living in vulnerable families are those showing the worst results in all the health indicators.
Following this argument, he said that if the main determinants of health are social, should also be the solution, aiming to favor the integration into the labor market of mothers and fathers, the promotion of nursery schools and guaranteeing access to health services and basic supplies for families.
The workshop also focused on the impact of social change on children and young people that generates greater impulsivity and makes the management of frustration difficult, while complicating the establishment of deeper ties within the family and friends.
Josep Matalí, coordinator of the Adolescent Addiction Behavior Unit at the Sant Joan de Deu Hospital, talked during his speech on the current situation of transition characterized by changes in the family structure and the emergence of new technologies, a change that should not be bad but makes necessary for adults to accompany children and young people, by setting limits and acting in a more coordinated way with those young people who show adaptation problems.
One of the most repeated ideas during the workshop changed the traditional approach by pointing the idea of leaving the hospitals and going outside their walls to look for young people and children with mental health problems wherever they are, instead of waiting for them to come to the consultations.
Marta Poll, director of the Mental Health Federation of Catalonia, claimed for the need of more support for families and better training for them. According to her, families also ask for more coordination among all the professionals involved in the treatment and support of young people and children with mental health disorders, because they often receive responses not aligned.
In the same way Mark Dangerfield, from the Day Hospital for adolescents of Badalona, highlighted the importance of the "key professional" figure. Dangerfield noted that this shift in emphasis would facilitate a team approach and would allow each professional to work with fewer cases, more effectively and at a lower cost. Finally, he also emphasized the need to train teachers and give them all the necessary support so that they can be effective in helping students who are with these difficulties.
Manel Jan, a psycho-pedagogue and family therapist, stressed that the school is not the origin of mental health disorders, but that it is a key player in the detection, treatment and support of young people and children with these difficulties.
Video of the event: https://www.youtube.com/watch?v=RWnfdP-g4LU&feature=youtu.be