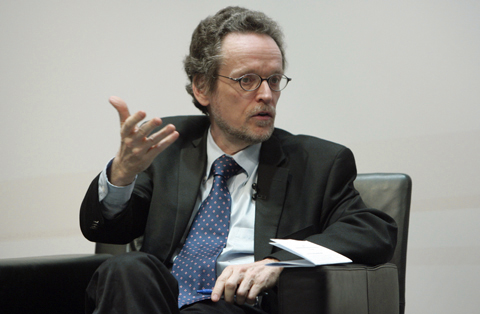 You argue that rich countries are violating the human rights of the world's poor. Which rights are being violated?

We are violating practically every human right, but in particular social and economic ones. I would point to article 25 of the Universal Declaration of Human Rights, that refers to every person's right to a level of life that allows the individual and his or her family to enjoy health, well-being and, in particular, food, clothing, housing, medical care and social services.

You also argue that there is a supranational, institutional system that generates massive human rights deficits. What are the most significant aspects of this deficit?

There continue to be large numbers of people who are deprived of social and economic rights. Many people suffer from hunger, or are unable to access health services, drinking water, electricity, etc. High levels of illiteracy persist; too many people don't know how to read or write, or can't perform mathematical calculations. And these are all signs of poverty.

Which countries suffer from these deficits?

In absolute terms, India is the country with most poverty, more even than countries in Africa. There are also other major countries with large poor populations, such as Bangladesh, China, the Philippines, Indonesia, Nigeria and Brazil. In these countries, the absolute number of poor people is not as high as in India but the percentage is very high. In this category we also need to include African countries such as Mali, Senegal, Equatorial Guinea and Malawi.

How much responsibility do the citizens of rich countries have for the decisions taken by their politicians that harm poor countries?

In countries such as Spain, citizens with a certain rational capacity are fully responsible for what governments do in our name. I don't mean poor people, but the average citizen with a normal level of education, a reasonable job and income level. If 10,000 Spanish citizens come together to make a specific demand, they can exert pressure and modify the behavior of their rulers. Spanish citizens can also influence the policies of the European Union, and Spain is a member of the G20 and is an important country with a lot of influence. So, from a citizen's point of view, a lot more can be done to solve the problem of global poverty.

So what do you think are the most effective ways for a citizen to help eradicate global poverty?

In addition to the initiatives I have already mentioned, we can also make personal contributions to effective international organizations, whether intergovernmental such as UNICEF, or non-governmental such as Oxfam. There are also a lot of organizations dedicated to specific causes, such as the Against Malaria Foundation. There are lots of groups that do a really good job and that, with small contributions from individual citizens, can achieve big things.

What do you think is the best way to motivate rich people to help poor people?

There are lots of ways to do it, because different people respond to different arguments. I would go further than Peter Singer. He argues that some people are rich and others are poor, but if the rich contributed a few euros the position of poor people could be greatly improved. And that, on its own, is a strong argument for helping. While I accept this argument, I also say that developed countries have contributed to generating most of the poverty that exists, and that for this reason we have a major responsibility to help solve it.

What measures do you think the international community should take to solve this problem? Do you think it is doing enough?

No, I don't think it is doing enough. Rich countries offer aid, but this is generally spent very inefficiently, because a lot of governments offer aid to benefit their own companies and to achieve their own political objectives. For example, developed countries offer food aid, but this food is dispatched from home ports and benefits exporting companies. Another example would be the construction of infrastructure, where the aid is often provided on the condition that infrastructure is built by engineers from the country providing the aid. In addition, aid frequently is not designed to address people's most pressing needs, but instead focuses on satisfying the wishes of political leaders.

What should we do?

It's not a question of increasing the amount of aid, but of establishing better rules for the economic system and international trade. At the moment, protectionism is a major issue in Europe, and this is designed to benefit EU countries. There are a lot of grants for agriculture, and that makes it difficult for poor countries to export their produce to the euro zone at competitive prices. Another example is the existence of a secret banking system in countries such as Switzerland, where it is possible to hold money without declaring it. And this provides corrupt leaders of poor countries with a place to accumulate their wealth and allows them to continue stealing from their citizens. If these leaders were unable to put their money in a safe place, we could eliminate part of the problem. In a sense, we in rich countries are supporting and facilitating corruption in poor countries, and this makes it difficult to eradicate global poverty.

When you talk about globalization, you argue that if there was any alternative route which would have led a smaller deficit of human rights should have been applied. Do you think that was? What it was?

Yes and no. When I criticize globalization, I do not criticize globalization with "capital G, which refers to the fact that the world is growing together and that there is a cross-communication between many countries ... What I criticize is the Globalization with "lowercase g", that it's the actual. Globalization means that the world is becoming a big entity with common rules; this is the "big G". But, "Which are these rules?" This is the key question. If these rules are correct, then I fully support the globalization. But the current rules are determined by the most powerful agents in the world: banks, large multinational corporations, large investment funds, billionaires. They have the power to influence in what their governments do. This causes small elite of "global players" that are leading international standards and other citizens can only accept, because we have no opportunity to intervene in them.

In the context of the current crisis and the economic difficulties faced by many families in simply getting through each month, should we prioritize help at local level or should we allocate aid globally?

The most important thing here is not to allow the elites to divide us. Your question implicitly accepts that poor foreigners are the big enemy of poor people in Spain, because they compete for jobs and for aid. But we need to unite, because we have a common enemy who is more important: the rich, the big multinationals, the banks. These are the agents who are creating the rules that harm everyone. If we talk in terms of competition between poor people across the globe then we will never solve our shared problems. The current crisis in Spain has its origins in the financial sphere. But who caused it? It obviously wasn't the poor. It was the banks, the big multinationals.

Finally, should private companies solve the problems that public administrations are unable to cope with, due to a lack of financial resources?