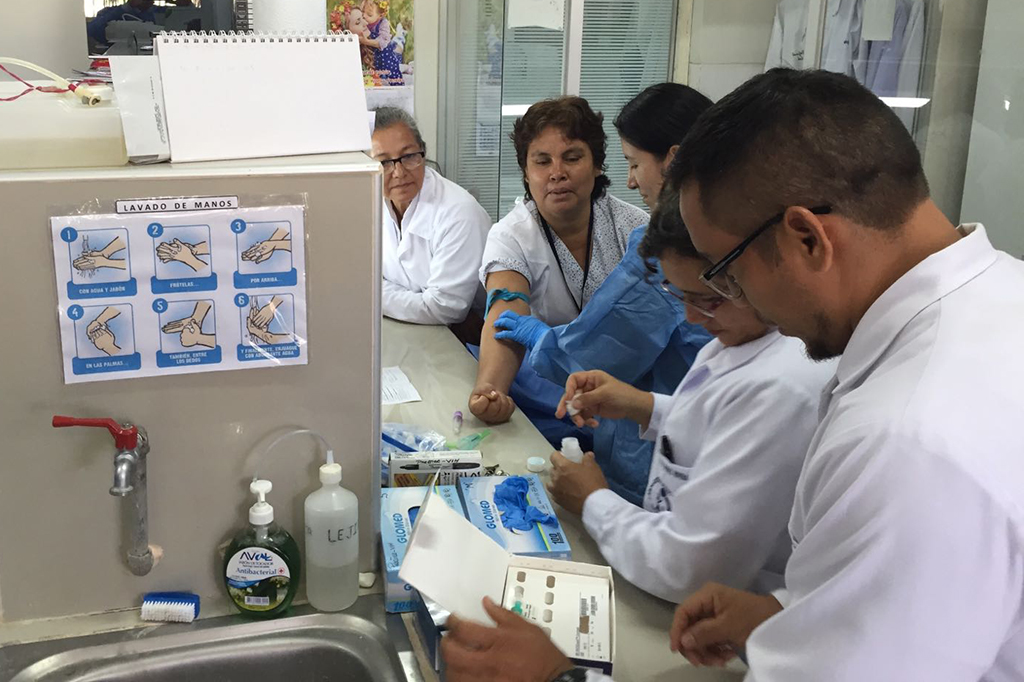 Probitas and UNICEF organized an international workshop to update on prevention, diagnosis and treatment of HIV/AIDS in indigenous populations living in the Peruvian Amazon

From November 8 to 10, the "Workshop on Updating  the management of HIV / AIDS in indigenous populations living in remote and difficult access areas in the Peruvian Amazon" was held in the city of Tarapoto, Peru, with the participation of Local health workers working in these regions.

This technical meeting was carried out in the framework of the alliance between the Probitas Foundation and the United Nations Children's Fund (UNICEF), as a continuation of the project started in 2014 with the objective of preventing, diagnosing and treating people affected by HIV/AIDS in indigenous communities living in Amazonas and Loreto regions.

This project is part of Probitas program, called GLI (Global Laboratory Initiative), whose main objective is to strengthen the response capacity of clinical diagnostic laboratories in vulnerable regions around the globe.

The three-day workshop was developed with the participation of three Spanish experts in the subject, Dr. Claudia Fortuny (Pediatrician), Tomás Pumarola (Microbiologist) and José Luis Casado (Infection diseases expert), as well as specialists from Peru arrived from Lima. It was attended by more than 40 professionals from the health networks of Condorcanqui, Datem de Marañón, Atalaya and San Martín provinces.

The training goal was to update on prevention, diagnosis and treatment of HIV/AIDS the health personnel who care for the population of the Peruvian Amazon. The meeting served to exchange experiences on the prevention of mother-to-child transmission, early diagnosis, biological monitoring and the comprehensive care and treatment of adult patients in different contexts.

During the workshop the results obtained throughout the project implemented jointly between Probitas and UNICEF in collaboration with the Ministry of Public Health were evaluated. These results include the adaptation of protocols to remote and difficult access areas, the prevention of vertical transmission of HIV with a special attention in breastfeeding and the treatment of mother and exposed child in this type of contexts.

It was also discussed the practical application of the technical standard of the Ministry of Health of Peru for the care of adult persons with HIV/AIDS, taking into account the existing diagnostic techniques for the biological monitoring, as well as the availability of antiretroviral drugs of great activity (HAART) in the country.

Do you think that the local health staff will be able to apply the knowledge acquired during the workshop in their daily activities?

"Definitely. I believe that the workshop will be useful for their day to day, I would even say that, in addition to specific clinical knowledge, the workshop gave them general knowledge necessary to spread the message on the importance of education, information and treatment within the population.

What were the most important points for you?

"I think there was discussion in all the basic aspects, both diagnosis and treatment, as well as problems on prevention and the adherence to treatment, either in adults and among children. Perhaps the most important thing was how to apply this general knowledge to the local problems."

What were the most polemical aspects?

"Undoubtedly the problems arising from cultural differences and geographical barriers, which make it difficult for people to understand the problems of the HIV/AIDS and also to increase among population the screening of the disease and the treatment of patients."

What impression did you take of the work that these health professionals carry out in these remote and inaccessible contexts?

"It is remarkable the way how they have to face problems, sacrificing time and family, trying to extend a health program, in this case in the HIV / AIDS context."

How do you think that the project of Probitas and UNICEF has been able to impact on the improvement of the HIV patient management, especially in the indigenous population?

"Probitas and UNICEF have been able to solve and improve the access to laboratory tests and to train the personnel for the correct handling of patients and tests. This fact is basic to be able to offer a comprehensive response to the population, since without them an adequate treatment of the patients can not be reached: information of the importance of the screening or laboratory tests information of its meaning, treatment and follow-up.."

What has it meant for you at the personal level to be able to hold this workshop in Peru?

"For me it has been an opportunity to do a lot of good work in a few days. Even more, because the training of so many staff is what guarantees that the assistance is well covered and the effort is not lost. I could have gone as a doctor, visit 20 patients a day, even 40, but I would never have had as much impact as having trained 40 people who are going to improve care for hundreds of patients."

"So thank you for giving me the opportunity. "

On World AIDS Day, we want to focus on the situation of indigenous communities in the Amazon, which have experienced an increase in the rate of HIV infections. These populations are currently living amidst large migratory processes, illegal extractive activities and the widening of the trade frontier that further aggravates their situation.

The low availability of health services and some cultural practices, are barriers for the population to access HIV / AIDS diagnosis, treatment and prevention. Because of this, the strengthening of the laboratories has been a key support for the population of these regions in the Amazon.

The Probitas Foundation has provided technical assistance in assessing the situation of the laboratories of the Condorcanic network and the Datem del Marañón network. Probitas has also actively advised and supported the simplification of the Technical Standard on HIV / AIDS care and diagnosis adapting them to these contexts and to the indigenous population, working together with UNICEF and the Ministry of Health of Peru.

Thanks to the efforts of these entities, during 2015, 8,360 HIV screenings were carried out. 98 HIV positive cases were identified, of which 62 are currently receiving treatment and can be monitored close to their place of residence. This represents a significant increase on respect 2013, before the implementation of the project, with figures of 5,940 screenings, 105 of them positive, but with only 20 patients receiving treatment.

During its execution, the project has been supported by the Ministry of Health of Peru (MINSA), through the National HIV / AIDS Strategy and the National Institute of Health (INS). Thanks to this, a public policy implemented by MINSA has been promoted for the benefit of all communities affected by HIV / AIDS and Sexually Transmitted Infections.