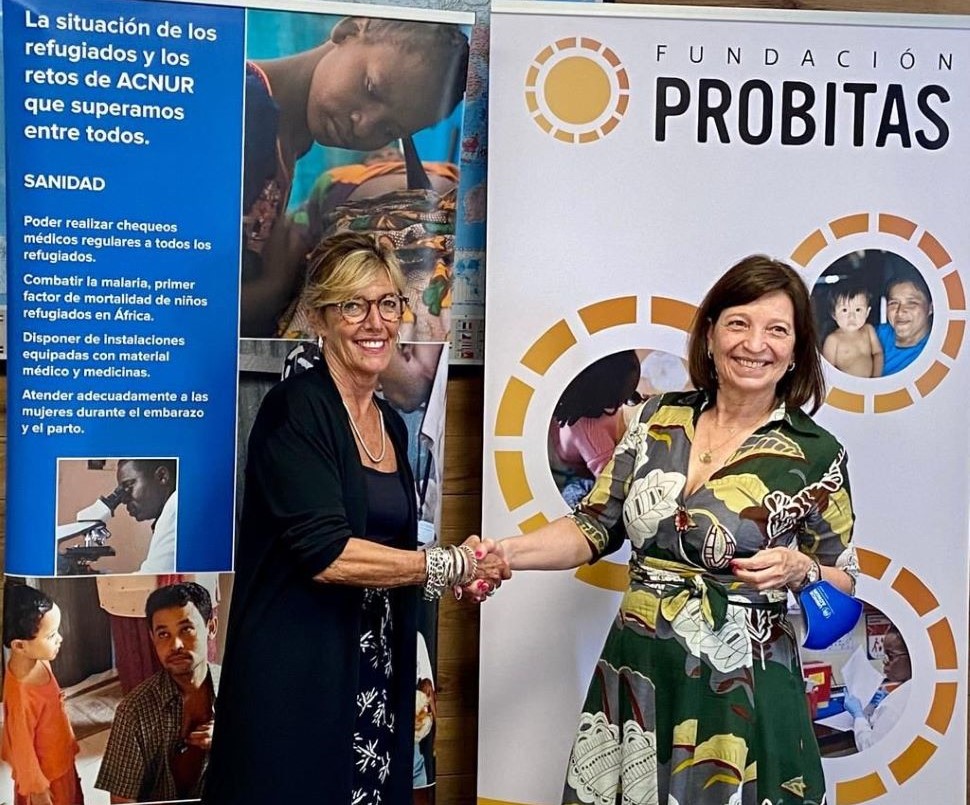 This partnership with the Spanish Committee of UNHCR, the UN Refugee Agency aims to contribute to strengthening the capacities of the public health system in Nigeria, where malaria is one of the main causes of mortality and morbidity, especially among children under 5 years of age.

The project aims to improve the diagnostic capacity and comprehensive care of patients with malaria and other neglected tropical diseases (NTDs) among the 47,600 people located in Cameroonian refugee settlements, as well as for 5,000 people in host communities.

The signing of this agreement, in which Dr. Anna Veiga, General Director of Fundación Probitas, and Belén Camba, Director of Institutional Relations of the Spanish Committee of UNHCR, took part, consolidates an alliance that allows for the pooling of skills and resources. Fundación Probitas will support the project implementation process by contributing its experience and knowledge in the field of health, specifically in the strengthening of basic clinical laboratories in vulnerable areas.

"With more than 82 million people forced to leave their homes due to conflict, violence or climate change, it is essential to join forces with the private sector to support refugees and host countries", says Belén Camba.

"Once again, UNHCR and Fundación Probitas are working together on a project in favour of Cameroonian refugees in Nigeria, where the population suffers from the deadly scourge of malaria. We will work to put an end to this scourge so that the refugees have options for a better future", says Anna Veiga.

This consolidates an alliance that allows us to continue adding capacities and resources, where Fundación Probitas will contribute its experience in the field of health and in the reinforcement of basic clinical laboratories in vulnerable areas.

The Probitas Foundation believes in the right to quality health and works to achieve universal health coverage through the projects we support and implement. For its part, UNHCR has been working to defend the rights of people forced to leave their homes and livelihoods, especially with regard to the right to health, for almost 10 years. The foundation believes in UNHCR's mission of coordination, monitoring and leadership on behalf of refugees. In this way we also aligned ourselves with the 2030 Agenda and the SDGs.

It was 2008 when Fundación Probitas was born. Since its inception, it has dedicated its efforts to improving the health of vulnerable populations living in remote and hard-to-reach areas. It is therefore not surprising that just four years later, in 2012, it launched its first project in collaboration with the Spanish Committee of UNHCR, working in favour of the most vulnerable populations.

The alliance with the Spanish UNHCR Committee began in the search to improve the lives of refugees on the jungle border between Ecuador and Colombia, where the foundation decided to substantially strengthen access to healthcare for these refugees living in Ecuador through the Global Laboratory Initiative (GLI) programme. Subsequently, Fundación Probitas and the Spanish UNHCR Committee jointly reached the desert plains of northern Ethiopia to support Somali and Eritrean refugees fleeing persecution and violence without basic conditions or health care. For this reason, after improving the nutrition of Somali and Eritrean refugees, they jointly embarked on a new project for Sudanese refugees in eastern Chad. In the middle of the endless desert that separates the two countries, the project aimed to improve access to drinking water and sanitation for the refugee population in six camps. Two years later, Fundación Probitas set out to work in favour of health through the fight against neglected tropical diseases, in addition to malaria, HIV/AIDS and tuberculosis.

Veiga recalls that "from the jungles of Colombia to the savannahs of Nigeria, passing through the deserts of Chad and Ethiopia, Fundación Probitas and the Spanish Committee of UNHCR have developed a relationship based on trust, common objectives and full conviction in the work carried out. Together we have brought the right to health to refugee camps halfway around the world".