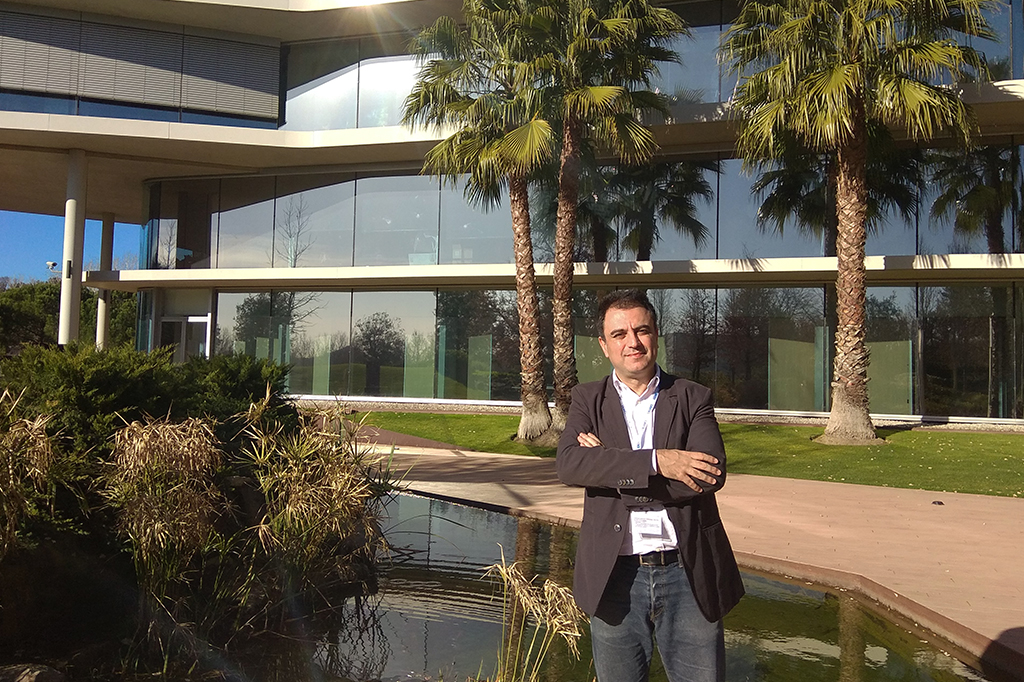 David del Campo: "Probitas not only provides its partners with resources, but also support and technical monitoring"

Probitas Foundation met with members of Save The Children Spain team to follow up on the projects they carry out jointly and to define potential ways to collaborate in the year that has just begun. Taking advantage of the visit, Probitas interviewed the Director of International Cooperation and Humanitarian Action at Save The Children, David del Campo, to get his views on how to work with the Foundation. Del Campo also spoke about his new book, in which he seeks to explain the impact of war on young Syrian refugees.

What is the relationship between Save The Children and Probitas Foundation like?
At the end of 2015 and early 2016 collaboration began between Probitas and Save The Children, based mainly on two lines of action. Firstly, development projects, and, secondly, humanitarian action programmes. Today Save the Children and Probitas are working on a project along each of these lines of action. In Sri Lanka there is a development project with the aim of improving water and sanitation facilities, as well as the health facilities in the Rathnapura district. Awareness campaigns are also conducted for the entire community. A project to prepare for future Ebola epidemics and mitigate the impact caused by the one 2 years ago is also being carried out in Liberia. Finally, Save The Children, supported by Probitas, also conducted a project in Greece for refugees, which consisted of providing aid to this group and defending their rights.

What do you think about the support that Save The Children receives from Probitas?
Probitas has one of the cooperation systems, for a private foundation, with the best planning, work and coordination in Spain. It has a great deal of experience and it shows when coordinating with actors like Save The Children. In addition, its evaluation and measurement of projects is very precise. As for its relationship, it should be noted that it is permanent. Probitas is aware of the issues involved in each of the projects it supports and I find it to be an exemplary actor in the private sector. In the 20 years I have been involved in the industry, I have encountered very few foundations like Probitas.

What do you find remarkable about the Foundation?
Probitas is exemplary in its desire to learn from the partners and collaborators with which it works, which allows us to learn also. It is very attractive to be able to learn from each other, as this is all too scarce in the cooperation sector in Spain. And this happens both on the ground and "at home". Another of Probitas's outstanding traits is its thorough attention to each project, which it strives to ensure. In short, Probitas not only provides resources, but also accompaniment and technical monitoring throughout the process and at Save The Children we are very satisfied.

What can you tell us about the projects in Sri Lanka and in Greece?
Sri Lanka is a country that many people do not know about, and Probitas is interested in helping to improve the living conditions of the population with which we work. The project aims to improve access to water and sanitation, as well as practices for better maternal and child nutrition amongst families on tea plantations in Sri Lanka. This initiative is important because one of the main groups that benefit is mothers and children. And being able to reach children through their mothers endows the project with dual benefits: protecting the family and that link between mothers and their children.

We also have the project in Greece. Here there is a rarely disgraceful situation due to the fact that, in a European Union country, right here on our doorstep, we have to intervene like we are. Nearly 23,000 children have been barred and are not even recognized as refugees. The violations of international law have been so severe that we have been forced to intervene. And in this Probitas process has given us a hand, to help boys and girls fleeing a war and then punished by Europe, which has penalised them for suffering a war. On this project we do not have subsidies from governments and those from the private sector are scant. But Probitas was able to respond to the emergency and that shows that it is able to react with the immediacy called for by a situation like that with the refugees in Greece. It sets an example.

Today is the presentation of your new book. What can you tell us about it?
It is a book in which I try to explain a bit, from the perspective of the responsibility of an organization like Save The Children (which has been working in countries with wars for many years, I personally, for 5), what it has been like to deal with an on-going war, through reports, documents, field visits and meeting the refugees in person. One day I was offered the chance to write a book on the subject, and I accepted. In the end it is about the impact on the war on children, the main group affected by the war in Syria. I cite striking figures, such as the 2,200 schools that have been destroyed, the 400,000 people killed during the conflict, the 5½ million refugees, and the more than 14,000 children killed by bombs.

What was your aim, as you wrote the book?
When I wrote it, my intention was for all this not to be forgotten. No one is demanding an end to the war in Syria. The book also contains accounts from the reports to which Save the Children had access, and personal interviews I conducted. The profits from the sale of the book will be given to Save The Children and Doctors Without Borders, for the refugees from Syria. It's a way to give them back the opportunity I've had.