The improvement of the primary care and hospital care of children and mothers in the Democratic Republic of the Congo.

The project aims to improve maternal and child health services by promoting the provisioning of high-quality health services at the centres attached to the Monkole General Hospital: Eliba, Moluka and Kimbondo. The project will be carried out on the outskirts of Kinshasa, in the areas of Mont-Ngafula and Selenbao, in the neighbourhoods of Kindele, Herady and Kimbondo, in the DRC. 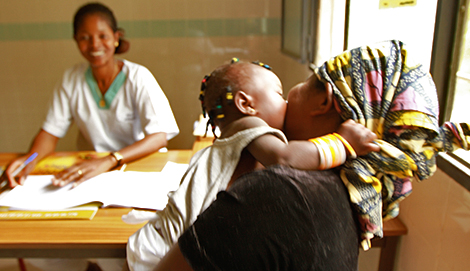 CONTEXT
The population of the area where the project is to be carried out is mainly made up of young people. The figures indicate that 47% of the population is under 15 years old, and the active population (15-65 years) comes to 50%. Although there are no official unemployment rates, different estimates place it at 80-90% of the population. There is no structured economy, but there is a subsistence economy that allows 90% of the population to live day to day, with no possibility of saving.

The maternal, neonatal and child mortality rates in the DRC are among the highest in the world. Demographic and health studies from 2013-2014 put the neonatal mortality rate around 28 deaths per 1,000 live births, and maternal mortality at 846 deaths per 100,000 live births. Quality and safety in care leaves much to be desired due to a lack of water and electricity, the reuse of single-use materials, the absence of a Blood Bank, and staff suffering from a lack of basic clinical skills.

PROJECT
With the main objective of improving maternal and child health services, the actions to be carried out in the area are the acquisition and distribution of medicines for women and children, and support for the clinical analysis laboratories at each health centre. Six training modules will also be designed and implemented in maternal and child care, aimed at medical staff at health centres.

Clinical action protocols will also be developed to improve the quality of maternal and child health services. Finally, an external communication plan will be designed, planned and executed for the health centres in Eliba, Kimbondo and Moluka.