Sports, Health and Development in Haiti

In April, 2014, the Probitas Foundation decided to work with the Nos Petits Frères et Soeurs Foundation ("Our Little Brothers and Sisters" in French, or NPFS) on a sports and health program aimed at improving the physical and psychological development of children living in the Kay St. Hèléne foster care home located in the community of Kensoff, and the St. Louis and St. Anne foster care homes (FWAL) in Tabarre. Both communities are located in the western district of Port-au-Prince, the capital of the country. The project will be underway until March 2019. 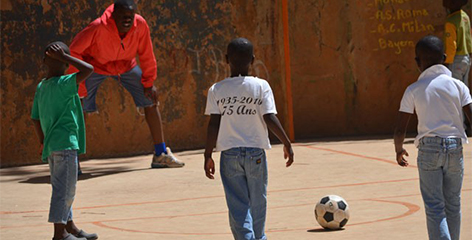 Haiti's economy suffered from a harsh blow in January 2001, when an earthquake measuring 7.0 on the Richter scale destroyed much of its capital, Port-au-Prince, and the surrounding areas. The poorest country in the Western hemisphere, around 80% of Haiti's population lives under the poverty threshold, 54% of them in extreme poverty. Seven out of every ten Haitians live on less than two dollars per day.

In 1987, Father William Wasson founded NPFS, a home for orphaned and abandoned children in the community of Kenscoff. St Helene is a home located around 25 kilometers uphill from the capital of Port-au-Prince. This home houses more than 400 children and has a primary and secondary school, along with other facilities. What is more, 350 children from the community of Kenscoff attend the school. There is another home within the St Helene complex with more than 30 children and adults that are suffering from neurological diseases or have special needs.

Both FWAL are located in Tabarre and were founded to help people affected by the earthquake in January 2010. These homes accommodate 180 children under the age of 14. FWAL has a primary school for children from St. Louis and St. Anne, and 600 more children from the neighboring communities in Port-au-Prince and the tent cities that have sprung up around the capital.

The program supported by the Probitas Foundation is striving to achieve improved physical and psychological development for the 1,150 children and youth housed by NPFS in the Kay St. Hèléne boarding school in Kenscoff and the FWAL homes in Tabarre.

Right now, the program is already underway, but to date some improvements have already been made because the first stage in the training of the local coaches has already been completed thanks to the presence of the first sports and health brigade made up of a seven-member team which travelled to Haiti in April.

During their stay in the country, the brigade held several meetings with the senior heads of both boarding school, sports and health training courses were held for local coaches, the local coaching team was assembled, and the first sports competitions were held under the direct, on-the-ground supervision of the members of the sports and medical brigade. The coordination and organization of the sports and health program is keeping up the same pace, with the participation of the children and youths from the Kay St Hèléne and FWAL homes after the supervisory brigade left the country.

As we await the conclusion of the project in 2019, the first results are quite satisfactory if we consider that the initial objectives are being met. Quantitatively, the program got underway with 1,150 children and youth, but as it goes forward the intention is to expand it to other schools and homes located in other areas of Port-au-Prince which the local partner supervises and coordinates.

Thus, we hope over time to reach a total population of 8,000 youth, but for the time being the program is still in its initial phase. The project still has to mature, but if it continues along the same pathway it can easily reach the target of 8,000 children.  On the other hand, it is still quite premature to assess the qualitative results expected in the children after the sports and health program has been implemented. We calculate that in the next six months we will be able to more effectively evaluate the qualitative indicators which will tell us the end effect of sports and health on the emotional and physical development of the beneficiary population. Despite this, in these first six months a crucial objective in the sound operation of the project has been achieved: starting the training of local coaches and beginning with the sports practices.