Promotion of Health and Empowerment of the Women from the Hushe Valley' in the region of Baltistan, Pakistan

From 2002, the Baltistan Fundacioa (BF) has been working in the Hushe Valley, in the region of Baltistan, Pakistan, with FFB the local NGDO. Integrating the gender perspective into all its interventions, the BF works specifically with direct interventions that improve the situation of vulnerability of women. In the present project ‘Promotion of Health and Empowerment of the Women from the Hushe Valley' the problematic lack of attention with respect to female health has been identified by the women themselves in participative workshops and a Health Diagnosis carried out in 2011. 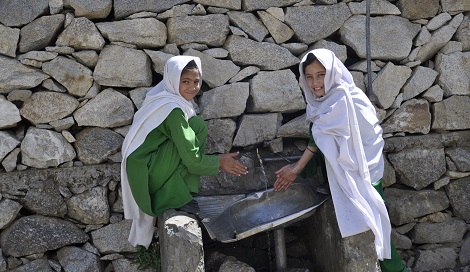 CONTEXT
The Hushe Valley is inhabited by 11,525 people (6,055 women and 5,470 men) in eight communities. They are Baltis, originally from Tibet although their religion is Muslim. They speak Balti. The inhabitants of the valley are used to very hard living conditions due to the climate and their isolation. In some areas the women are discriminated against and do not participate in public or social life.

The healthcare services are very scarce and incapable of providing assistance to all the population due to the bad condition of the roads. Like the rest of the valley's social life, the women are discriminated against accessing healthcare because of cultural restrictions and the lack of specific services and installations for them.

Baltistan was annexed by Pakistan after the war with India over the region of Kashmir (1947-1949). Currently, Gilgit-Baltistan has a particular status as it is located in this disputed territory. The delicate political situation, the geographical isolation and lack of communication due to the terrain, and the levels of poverty are some of the reasons that explain its marginality with respect to other areas of the country.  ,

EXPLANATION OF THE PROJECT
In order to achieve the project's objectives, training and capacity-building activities will be carried out for the local health worker (Lady Health Visitor). Her responsibility will be to attend women during pregnancy and childbirth and the newborns. At present, however, lack of knowledge and practice impede her from doing this.

In a parallel manner, women from the valley will receive training in maternal-child health and hygiene to improve their knowledge about healthcare and thus prevent problems and decrease maternal mortality.

Another activity will be centered on the extension of the School Health Plan which will be carried out in three schools more in order to create basic hygienic habits, and prevent disease and death, in the school children.,

Finally, training in health will take place for the men of the valley so as to include them in the role of the carer and increase their participation and prominence in family and community healthcare.

BENEFICIARIES
It is estimated that 1,300 women will take part in the training sessions. In addition, other beneficiaries will include women attended by the midwife with a mobile ultrasound in the health centers and the communities. Finally, around 860 children aged less than 15 years will participate in the school health plan.