Provide tools to the NCZD of Mongolia for the identification and monitoring of active transmission of E. granulosus and the creation of a baseline in Bayankhongor province

Cystic echinococcosis (CE) is a major health burden for nomadic herders in Mongolia. This project will provide preliminary field data by conducting an echinococcosis monitoring and evaluation program in Bayankhongor that includes evaluating infection in dogs. The ultimate goal is the development of a National Action Plan for Echinococcosis Control in Mongolia. In this way, the entire nomadic pastoralist population of Mongolia will ultimately benefit from the project results. 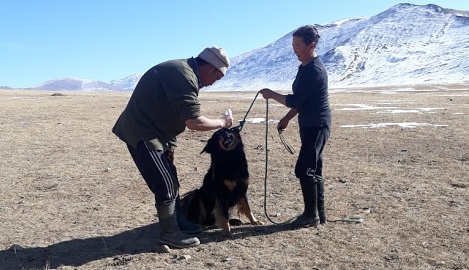 Cystic echinococcosis (CE) is a human disease transmitted by dogs and caused by a helminth parasite, Echinococcus granulosus. It has a worldwide distribution, but is more common in poor pastoral communities. CE is one of the groups of diseases formally recognized by WHO as a neglected tropical disease and a neglected zoonotic disease. CE is transmitted by dogs. Monitoring infection rates in dogs is the most widely used and effective method of evaluating disease control measures. The only commercially available copro-Ag test for dogs is made in China. It has never been evaluated or validated in Mongolia.

The project has two main objectives:

First: assess the sensitivity and specificity of a coproantigen diagnostic test to determine its suitability for monitoring a pilot echinococcosis control program in Mongolia, while improving capabilities at the National Center for Zoonotic Diseases (NCZD) and second, to use the coproantigen test to assess a region in Bayankhongor province.

The idea is to determine the prevalence of echinococcosis transmission in the province and thus establish its suitability for a pilot echinococcosis control program.This diagnostic tool will be vital in a program to be implemented in Mongolia for the control of one of the WHO neglected diseases, cystic echinococcosis (CE), which is an important health burden for nomadic herders in Mongolia.

After completing the validation of the test, a field survey will be carried out in a region of Mongolia that was selected at the multidisciplinary stakeholder meeting convened by the WHO in Ulaanbaatar in November 2018, to develop an Action Plan National Institute for Echinococcosis Control in Mongolia. The draft Action Plan formulated by the participants, and to be coordinated by the NCZD, included the implementation of a pilot Echinococcosis Control Program in Bayankhongor along with monitoring and evaluation including evaluation of infection in dogs. Thus, this project will provide preliminary field data to support the post pilot control program (which is not part of this application).

CE is a major health burden for nomadic herders in Mongolia. The objective of the project is to provide a tool at the public health level to start a control program with quality and precision data on the disease in Bayankhongor province. The entire population of nomadic herders in Mongolia will benefit from the disease control program that will be launched after obtaining the field results of this project.