Developing capacity to monitor parasitic NTDs through Kato-Katz in Cambodia

There are many parasitic NTD in Cambodia, such as taeniasis / cysticercosis, schistosomiasis, and soil-transmitted soil-transmitted helminth infections. Diagnosis of these parasites and diseases can be accomplished using fecal specimens and simple techniques such as the Kato-Katz test. For some infections the test is highly effective; For others, such as Taenia solium, Kato-Katz can be very useful as a screening test or as a first step in mapping endemic areas in a country or region. 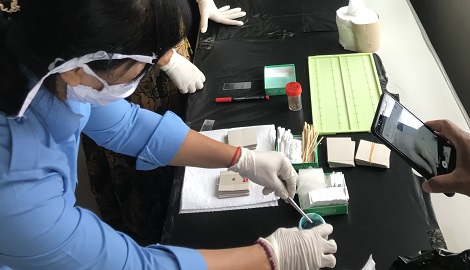 Taenia solium occurs in very poor communities where basic sanitation is poor, open defecation is practiced, and pigs roam free. Sanitation is poor in the country, as the 2010 national sanitation and hygiene survey showed, in which the data showed that only 31.8 percent of Cambodians use latrines.

Cambodia has made good progress in controlling and eliminating some DTEs such as trachoma, lymphatic filariasis, mekongi schistosomiasis, and geo-helminthiasis, but has not yet started with other neglected diseases, such as T. solium (cysticercosis).

• General objective of the project.

Develop capacity to monitor certain ETDs through the Kato-Katz technique in 5 provinces of Cambodia and carry out preliminary surveys for Taenia solium.

Goal 1:CNM trainers will carry out the training on the Kato-Katz technique in one of the 5 provinces. Technicians from the other 4 provinces will attend this training.

- During the Kato-Katz training, emphasis will be placed on the diagnosis of Taenia spp and Schistosoma mekongi.

- Communities suspected of being endemic for T. solium or presenting risk factors (presence of clinical disease in humans or pigs, deficiencies in basic sanitation together with backyard pigs) in the 5 provinces will be identified.

- From these identified communities, at least 500 samples per province will be analyzed using the Kato-Katz methodology.

- Ten provincial and district laboratories (approximately 50 technicians) will be trained to perform the Kato-Katz- In the 5 provinces, the Kato-Katz will be used to diagnose endemic communities identified through risk factors.

The project will transfer the Kato-Katz methodology for the diagnosis of different parasites in human feces to 5 provinces of Cambodia, which will include all the laboratories of the provincial and district reference hospitals of those 5 provinces.This will greatly facilitate monitoring and evaluation of some parasitic NTDs and will ensure that staff at the provincial and district levels are trained in the diagnosis of intestinal helminthiasis.Samples will be taken from the communities that present the risk factors for the transmission of Taenia solium (low sanitation and the presence of backyard pigs). In this way, the areas and communities where the disease is endemic can be identified.

The direct beneficiary population will be the technical laboratory personnel of the 5 provinces, which will include personnel from all the laboratories of the provincial and district reference hospitals of those 5 provinces. It is estimated that it could be approx. 50 employees (it is estimated that 50% are women). They will be trained in the Kato-Katz technique, with an emphasis on T. solium and S. mekongi. The preliminary survey for T. solium will eventually benefit affected communities, but the numbers cannot be confirmed until the mapping is complete and, in the long term, an action plan is established.