The project takes an integrated approach to the control of Chagas disease, malaria and maternity issues in twelve Awa indigenous communities in San Lorenzo health district 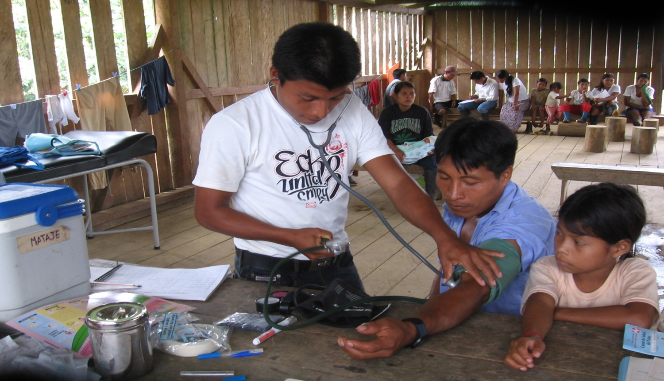 San Lorenzo canton is in the north of Esmeraldas province, on the border with Colombia. It has a total population of 50,727 inhabitants, dispersed over a large area, resulting in a very low population density (13.9 per sq. km). Its 11 rural parishes include Ricaurte, Alto Tambo and Mataje, where most of the indigenous Awa inhabitants live (3,232). They are "slash and mulch" cultivators, and their diet is based on chiro and yuca (carbohydrates) with relatively low protein intake. Geographic inaccessibility limits access to basic services. The illiteracy rate is 15%, and economic activity is concentrated in the agriculture, livestock, hunting, fishing and forestry sectors (48%). Consumer poverty is 53%.

Each Awa community has its own leaders, who work in partnership with the FCAE to organize the members of their community to improve every aspect of their lives. Six of the twelve communities are supported by the Federation of Awa Communities of Ecuador (FCAE), founded in October 1986. However, physical dispersion means that access to health services is infrequent and is often delayed. Malnutrition, malaria, early pregnancy and various neglected diseases such as Chagas and strongyloidiasis (a roundworm parasite infection) are major problems.

• Take an integrated approach to the control of Chagas disease, malaria and maternal health issues.

• Improve decision-making capacity of Awa health promoters with regard to the prevention and control of local health problems.

• Training of health promoters through residential courses and fieldwork, and provision of basic equipment to perform their activities.

• Health promotion, and disease prevention and control. The project will contribute to the implementation of the Ecuadorian government's public health programs through multi-purpose community visits. During the course of the year, health teams will undertake four visits to their communities, with a minimum of one day's duration for very small or easily accessible communities, ranging up to four days for larger or more remote ones. The health team will consist of a doctor, nurse or nursing auxiliary, obstetrician, dentist and health promoter.

• Action research. With the aim of gaining more detailed knowledge of the population's health problems, during community visits – when necessary – screening will be conducted to identify the existence and nature of problems that are not identified as a result of morbidity checks (Chagas, malaria, strongyloidiasis).

• Monthly monitoring of preventable morbimortality. Once a month, at the San Lorenzo health district offices, there will be a meeting of the health teams of the 12 operating units and the health promoters to collect and analyze serious cases and deaths occurring during the month (capacity-building in action) to update information regarding the problems that require intervention, and to schedule community visits for the following month.

• Strengthen indigenous organization, enabling it to design and implement proposals in accordance with the needs of the population. To this end, there will be two meetings per year with the federation of Awa communities (FCAE).

1. Establish technical–community vigilance system, to identify the scale of the threat posed by neglected diseases, with a view to diagnosis, treatment and control in the Awa population.

3. Most at-risk locations identified, in order to implement control actions for specific diseases.

4. Active participation of FCAE and Awa communities in the definition and implementation of local health plans.

5. Improved health service management, to help quantify, analyze and improve the health of the community.

Total no. of direct beneficiaries: 3,232

The indirect beneficiaries are the 38,986 inhabitants of the region. 45% of this pluricultural, multi-ethnic population (of African and mixed ancestry) are located in rural areas, concentrated in 55 small communities, while the majority live in urban districts, in approximately 30 marginal neighborhoods.