In October 2013, the Probitas Foundation decided to partner on the project spearheaded by the non-profit cooperative Azimut 360 and the Délégation Fondation Akwaba (DFA). The purpose of the project was to install an autonomous photovoltaic solar system to cover the energy needs of the healthcare center in Gonfreville, a marginal zone located in the city of Bouaké (second capital of the Ivory Coast). The project execution was to last one year and it concluded in October 2014. 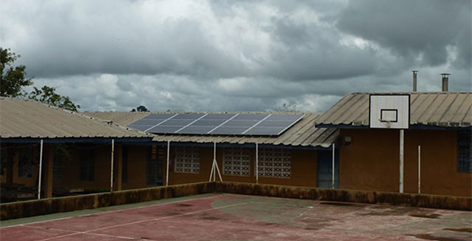 The longstanding lack of electrification in the Ivory Coast has been magnified in recent years because of the country's social and political crises, constant cut-offs in the electrical service, thefts of electrical cables and the poor state of conservation of the electrical lines by the company that supplies and commercializes electricity, which has a monopoly on the industry.

These factors make it impossible to provide high-quality social and healthcare services, and they limit the country's opportunities for development. All of this is compounded by the extremely high price of electricity, which often makes it unfeasible to provide total electrical service in some of these centers.

Today, the electricity penetration rate in the country is 31%, but the proportion of households which use electrical energy as the main source of lighting is just 14% in the rural areas and 77% in the urban areas.

Gonfreville healthcare center is a non-governmental social center which offers basic healthcare services to the most disadvantaged people, especially women and children who are living in this area on the outskirts of the city of Bouaké. The center receives around 4,150 visits per year, including the general medicine, obstetrics, gynecology and nursing services.

A total of 5.9% of these visits are for children between the ages of 0 and 11, and the most frequent pathologies are malaria, typhoid fever and respiratory diseases. All of these visits are joined by the almost 2,400 laboratory activities involving blood testing and other kinds of exams.

The Gonfreville healthcare center was unable to guarantee the optimal quality of its services because it did not have a permanent, reliable electricity supply, so the conservation of vaccinations and medicine was constantly being affected. This town needed quality healthcare at a minimum cost.

The Probitas partnership program implemented an electrification system for the Gonfreville healthcare center based on an autonomous photovoltaic solar system which was installed to cover these energy needs, with the auxiliary support of the conventional electrical grid. This has contributed to improving the healthcare services which are so crucial to lowering the poverty level among this population.

The project also included workshops on energy efficiency which were offered to the staff of the center so that they could apply this knowledge in the center's facilities.

Both basic and advanced training sessions were also held for the maintenance technicians from theDélégation Fondation Akwaba with the goal of ensuring the long-term sustainability of the photovoltaic installation. Finally, the program included the design of an electrification model of healthcare centers that could be reproduced in other rural and periurban zones in the Ivory Coast and West Africa.

*Figures pending updates according to the final report