Installation of a healthcare dispensary for the Adengur School, Ethiopia

A thousand children with very scarce resources who come from Woldiya, one of the poorest areas of Ethiopia, are receiving an education thanks to an integral renovation of the Adengur School and the support of a number of international organizations and local entities. The Probitas Foundation has also participated in this project by setting up a medical dispensary and installing a new service for the necessary sanitary and nutritional material. A nurse has additionally been contracted by the project to carry out medical and nutritional follow-up for some children who otherwise would have no possibility to access medical care due to the extremely precarious context they live in. 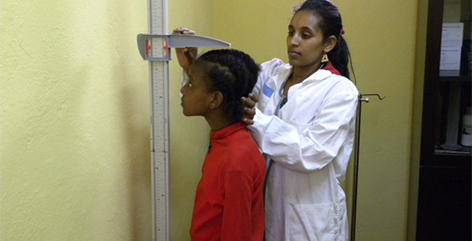 After the first phase in renovating the centre, in 2011 the Probitas Foundation worked together with IPI Cooperació to install a dispensary in one of the classrooms of the Adengur School. The Foundation's project also permitted the equipping of the dispensary with suitable material and infrastructures and the contracting of a nurse full-time from Monday to Friday with the objective of carrying out medical checkups and vaccinations, and controlling weight-height follow-up for the students at the centre.

The nurse, who is also responsible for activities concerning preventive medicine, sanitation education and awareness programmes, attends some 15 cases daily. Amogst the pathologies most frequently detected are wounds, skin infections, respiratory problems and gastrointestinal ones. Complex cases are referred to the General Hospital of Woldiya. At present, some 7 to 10 children per month have to be referred. The project plans to implement a medical check-up programme for all the children so that each child has a medical record. It is a pioneer intervention in a country like Ethiopia.

In spite of its ancient history and the fact that it was the only country to excape colonialisation during the sharing out of Africa in the XIX century, Ethiopia is better know for its severe alimentation problems than its culture. It is a unique African country. In 1931 the Emperor, Hailie Selassi, established a dictatorship which, interrupted by five years of Italian occupation (1936-1941), lasted until the socialist revolution in 1974.Whilst the communist regime made the economy more socialist and tried to improve illiteracy, the internal wars and the destruction of the forests because of an industrialization policy led to a terrible period of starvation in 1984. Recently, in 2011 the country was again in the news because of another alimentation crisis.