In 2013, the Probitas Foundation decided to partner in a new project being spearheaded by the Vall d'Hebron Research Institute (VHIR) in Nossa Senhora da Paz Hospital in Cubal, Angola, with the purpose of improving the prognosis and quality of life of patients with multidrug-resistant tuberculosis (MDR-TB). In Cubal, specifically, tuberculosis is one of the leading causes of death among the population, and the public laboratories within the health system have serious shortcomings which hinder them from properly diagnosing and handling the cases, especially of MDR-TB. The project is expected to last until 2015. 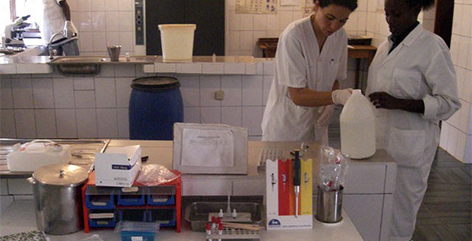 Angola achieved its independence in 1975. However, that same year there was also an intense and devastating civil war, which lasted until 2002. Even though it is one of the African countries with the highest economic growth in the past few decades, and one with abundant natural resources (oil, gas and diamonds), Angola still has an unstable economy.

On public health issues, it stands out for having high tuberculosis (TB) and malaria rates. It is estimated that the tuberculosis incidence rate is almost 300 cases per year per every 100,000 inhabitants. The cure rate is 70%. Despite this, in Cubal specifically tuberculosis is one of the leading causes of morbimortality.

In 1973, Nossa Senhora da Paz Hospital, located in Cubal, became a dispensary for the congregation of the Company of Saint Theresa and became a hospital in the midst of the civil war. In the late 1990's, it started to be managed by the NGO Mans Unides.

It now has 400 beds divided among the pediatrics, internal medicine and infectious disease services, as well as medical-surgical, maternity, traumatology and outpatient surgery units. For many years, the hospital witnessed the death of many of these patients. With this project and the commitment of the Angolan Ministry of Health, the patients will benefit from a new treatment protocol to restore their lost health.

The project is being launched to reinforce the capacities of the diagnostic laboratory by the implemented of a quick genotype technique to diagnose TB. The project entails the incorporation of the Xpert MTB/RIF equipment (GeneXpert, Cepheid) and training for the laboratory technicians working in the Angolan hospital in molecular diagnostics.

It is a sustainable plan over time, since after the program concludes the team and the knowledge they have acquired will have been transferred to and retained by the local partner, which will enable them to join the network of the country's Ministry of Health.

After gathering the data obtained from the new diagnostic system, the researchers in the Microbiology group at the Vall d'Hebron Hospital will analyze more than 500 samples from the hospital in Cubal to conduct a study on the sensitivity to anti-tuberculosis drugs by conventional methods.

These analyses will be used to evaluate the results obtained from the Xpert equipment and to compare the sensitivity and specificity of both techniques used. What is more, these data will be used to conduct a pioneering study on the prevalence of MDR-TB in the region.

In this way, epidemiological knowledge of MDR-TB will allow us to draw up appropriate therapeutic guides in order to lower the morbimortality of the illness in the region and to once again evaluate the guidelines established within the National Health Plan of Angola, if needed.

Right now this project is in the following phase: