Access to healthcare for vulnerable people in the urban, periurban and rural populations of Sucre and improving the diagnosis and prevention of prevalent diseases were the two objectives that the Probitas Foundation set when undertaking this project in conjunction with the Dr. Georges Duez People's Hospital of the IPTK. Since the 1980's, the decade in which the free market economy was put into place, miners were relocated and there was a heavy migratory movement of farmers and miners into cities, the IPTK has been working to provide services to the migrants in Chayanta province and to families experiencing over-exploitation and poverty in the city's marginal neighborhoods. 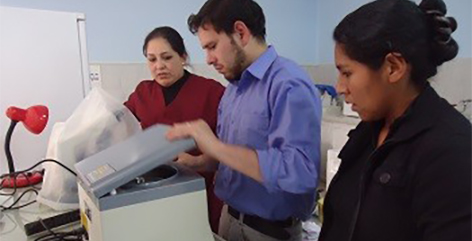 In the 1980's, Bolivia suffered from a decade in which the country's free market economy was put into place, miners were relocated and there was a heavy migratory movement of farmers and miners into the cities. One of the towns affected by this was Sucre, whose population in both the urban nucleus and surrounding area increased, leading to what is called the "informal economy".

That was when the IPTK, the owner of the currentDr. Georges Duez People's Hospital, began to provide services to migrants in the province of Chayanta and to the families who wereexperiencing over-exploitation and poverty in the city's marginal neighborhoods. Indeed, one of the IPTK's social development policies is to assist the neediest communities in the department of Chuquisaca and in the northern part of the department of Potosí.

Thus, it has cared for 100,000 patients per year in 17 specializations at a polyclinic and at 8 outpatient clinics in the areas far from the city. In 2004, the polyclinic was turned into what is today the Dr. Georges Duez People's Hospital, whose services were expanded to include surgeries and intervention rooms, making access to healthcare more feasible for the poorest people living in the periurban neighborhoods of the city of Sucre and the communities in the departments of Chuquisaca and Potosí.

When the hospital was built, the laboratory service was limited to basic care, given that it had the minimum material and equipment (microscope, centrifuge, reagents and glass materials, etc.). When the influx of patients and the population's requirements led this hospital to fall back to the second tier, around ten years ago, its facilities had to be improved, so the laboratory service was left by the wayside.

Thanks to the partnership with the Probitas Foundation, the quality of care for the most vulnerable people was implemented and improved with the right equipment: two microscopes, sterilization and culture oven, precision scale, two refrigerators, a star fax, hematological counters, a laminar flow cabinet and the expansion of the microbiology service.

In the healthcare improvement project, one of the IPTK's goals was to provide specific care to the neediest population, as well as to respond to technological demands: hence the project to expand and implement the IPTK's laboratory service.

Thanks to the implementation of this project, which was completed on May 31, 2014, the Dr. Georges Duez People's Hospital now has suitable infrastructures to provide medical care in different specialties, as well as a laboratory with the right technology given today's medical needs. Thus, delays are avoided and reliable, trustworthy results are yielded in order to give more precise diagnoses and provide the hospital's patients with the right treatment.

Another success of this project was to train the hospital staff working in this service in the right techniques needed to handle this technology to avoid and lower the margin of error in the results.
The improvement and updating of the laboratory and the staff training have contributed to lowering mortality rates among mothers giving birth, children and the vulnerable population with few economic resources.