AIDA is a non-governmental organization for development which has been working in the international cooperative sector since 1999. Since its founding, AIDA has carried out more than 140 cooperative projects in 15 developing countries. In Guinea Bissau, where it is performing the present project, AIDA is specialized in socio-medical programs focused on assistance for the most vulnerable population and the improvement in access to healthcare for the citizens. It has also built community schools and kitchen gardens which are managed by women, is working on the defense of human rights, and has carried out various projects in the fight against AIDS. 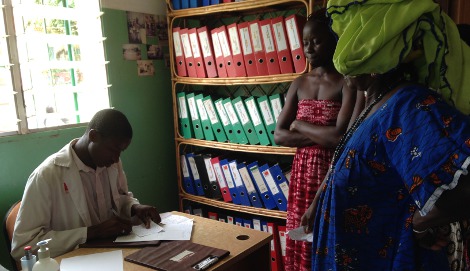 CONTEXT
The present project is the continuation of work started by AIDA in 2008 at the Simao Mendes National Hospital in Bissau. This hospital is by far the largest in the country and the only one with specialties (surgery, pediatrics, gynecology/obstetrics, internal medicine, a burn unit, ophthalmology, traumatology, and intensive care); its interventions are focused on care for patients without economic resources and mother-child health.
Guinea Bissau rates 176 out of 187 in the Human Development Index (UNDP), and 69% of the population live below the poverty threshold (less than $2/day) whilst 33% live in extreme poverty (less than $1/day). The public administration is practically inexistent and the country's inhabitants lack the most basic services (light, water, sewerage). Such a situation has resulted in Guinea Bissau having one of the worst health indicators in Sub-Saharan Africa, particularly with respect to maternal and infant morbidity and mortality.
EXPLANATION OF THE PROJECT
In the last 8 years AIDA has carried out interventions dealing with the lack of right to health in Bissau, always in collaboration with the Regional Health Directorate. In addition, the continuous presence of AIDA in the National Hospital, where it has its headquarters, the work of a well-consolidated local team, and knowledge about the surroundings in which its projects are being developed, have permitted public entities, and of course the rights holders, to appropriate these initiatives.
The main activities to be developed during the intervention are the following:
- To supply medication and medical-surgical material to people without economic resources or seriously ill at the Healthcare Centers and the Bissau National Hospital, with particular attention to pregnant women and children aged less than 5 years.
- To provide personalized information for patients at the Maternity Service and the mothers of the patients at the National Hospital Pediatric Service about issues of basic prevention and the promotion of child health: newborn care, nutrition, breastfeeding, health and hygiene habits, prevention of domestic accidents, prevention of malaria and the like.
BENEFICIARIES
The direct beneficiaries of the project will be the patients who attend the National Hospital's Emergency Room (at least 6,000) and the Health Centers (at least 4,000), seriously ill patients at the National Hospital who lack the economic resources to acquire the medication they need (at least 5,000), the women who give birth at the National Hospital Maternity Service (at least 4,500), and the mothers of the children hospitalized in the Pediatric Service (at least 3,500).
Download our annual memory
Browse and learn about the projects with our interactive map
Visit the blog and subscribe to our Newsletter