In 2011 the GLI-Lunsar project was boosted in Sierra Leone collaborating with the hospital Saint John of God, located in the Mabesseneh neighborhood of Lunsar, one of the principal cities of the country. Since 2005 the hospital has been carrying out a brotherhood program with the Hospital Sant Joan de Déu in Barcelona. After fifteen years of civil war Sierra Leone has one of the lowest health indicators in the world: the Ebola epidemic which broke out in 2014 continues to ravage a population that is getting even poorer and stigmatized. The objective of Probitas is to help to renovate the hospital and laboratory, improving access to healthcare for the communities in the area. 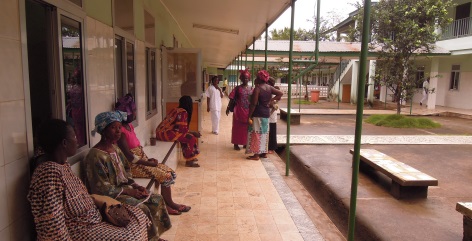 Sierra Leone has a population of more than 6,319,000 inhabitants and the life expectancy is around 50 years. Maternal and infant mortality rates are some of the highest in the world.  For every 1,000 births, 73 children die, and for every 100,000 births there are 1,360 maternal fatalities. In addition, around 70% of the population lives below the level of extreme poverty.

The civil war represented a huge loss of human resources and capacity, besides which the destruction of roads and other basic infrastructures has left Sierra Leone in a very precarious situation. In 2014 the Ebola epidemic spread all over the country. As a result, the healthcare system collapsed and chaotic organization led to the death of more than 11,300 people.

The Global Laboratory Initiative has focused its activity on the Saint John of God Hospital (SJGCH), located in Mabesseneh. It is an established missionary center that currently functions as a state hospital of reference. In spite of the war affecting the area the hospital reopened in 2002 and, in 2005, was incorporated into the brotherhood program with the  Hospital de Sant Joan de Déu in Barcelona. During the Ebola epidemic the hospital was closed but a few months later with the "free of Ebola" declaration by the WHO, it resumed its activity.

The aim of the Probitas Foundation is to improve the structure and installations of the hospital and transform it into a model of ecological energy, supplying it with electricity and water, installing sewage facilities, and improving all the laboratory área.

During the first phase a diagnosis of the situation was carried out and the main objectives identified: reinforcing the current laboratory infrastructures with renewable energy and ecological systems to create a ‘green' and self-sufficient laboratory (ECO-GLI); additionally, to start local capacity-building, including the laboratory teams, and the training of local personnel for quality care and good management of the laboratories and related services.

In the second phase of the project the infrastructures and installations were improved and the laboratories of the Saint John of God Hospital equipped.

During the third phase, local staff completed an update course on diagnostic techniques, with specific training in haematology, microbiology and laboratory management.

Final project evaluation was conducted by an external assessor in 2018, and recommended that, although all project phases had now concluded, it was important for the laboratory to continue reporting its activities to Probitas to enable us to support interventions, particularly the implementation of a community project to tackle management of the most prevalent diseases.