GLI Cubal started in 2017 in collaboration with the "Vall d'Hebron Institut de Recerca (VHIR)" and the hospital " Nostra Senhora da Paz de Cubal (HNSP)", private hospital that is part of the public health network. A partnership agreement was signed with the Provincial Department of the Ministry of Health of Angola, with the aim of providing healthcare in infant and maternal care and internal medicine, with an emphasis on infectious and parasitic disease in the region. 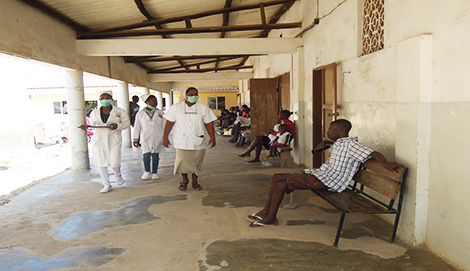 Cubal context
Cubal is one of nine municipalities in the province of Benguela, one of the eighteen provinces in which Angola is divided administratively. Benguela has an area of 31,788 km2 and an approximate population of 2,036,000 inhabitants. For its part, the municipality of Cubal is made up of the Cubal headquarters and three commonwealths: Yambala, Tumbulo and Capupa. The rural area of the municipality receives 97% of the population.

The city of Cubal presents worrying indicators, especially in the rural area. A serious increase in infectious diseases (Tuberculosis (TB) and HIV/AIDS) is associated with determinants classic of health such as poverty, polygamy, lack of health education, unhealthiness, difficulty shown in access to health systems and a high percentage of chronic malnutrition. To all this we must add that 70% of the population does not have access to treated water, that only 12% have latrines and that 78% do not have mosquito nets. The general lack of health education programs, the critical situation for women in terms of sexual violence, domestic violence, illiteracy and the lack of jobs opportunities for young people are other indicators that give an idea of the conditions in which the community lives.

The hospital in the area has an admission capacity of about 200 people. Annually, between 5,000 and 6,000 people is admitted and there are about 25,000 assisted on an outpatient basis. The highest mortality is in infectious and poverty-related diseases, with emphasis on malaria, tuberculosis, diarrhoea, malnutrition and AIDS/HIV.

The project's goals
The main objective is to strengthen the diagnostic capabilities of the Hospital Nostra Senhora da Paz. But also, with the GLI project it is wanted to:

The aim of this project, currently at its final stage, is to improve the correct diagnosis, treatment and follow-up of prevalent diseases in the region (TB, HIV, malaria, soil-transmitted helminthiasis, schistosomiasis etc.), and to improve laboratory organization for more effective staff management and rational resource use.


The project also includes training for laboratory technicians and interns to ensure they are up to date with the latest diagnostic techniques, thereby delivering higher quality laboratory results.

GLI-Angola has pioneered a mobile solar system to power the laboratory, designed to ensure it is self-sufficient in electricity. This initiative is the first to be launched within the framework of the GLI program, as a pilot project for future undertakings.

One of the added values of the GLI project in the Cubal region is that it will make it possible to integrate the laboratory with the country's healthcare system, thus strengthening the health system as a whole.


GLI Cubal will also improve diagnosis, treatment and follow-up of tuberculosis, one of the diseases with highest prevalence and incidence in the region.