A hybrid micro-network system with a capacity of 2,692 kWh per month has meant that the Hospital of Mabesseneh, in Sierra Leone, can open its operating theatres, delivery rooms and intensive care unit 24 hours a day. At the same time, 298 students from the nursing school have been able to link up to Internet to improve their training and obtain capacity-building from staff at the Hospital Sant Joan de Déu in Barcelona. Since 2010 the Probitas Foundation has been supporting the renovation of this hospital of reference which, dismantled by the Civil War, has managed to reinstate itself and assist thousand of people with scarce resources in one of the poorest countries in the world. 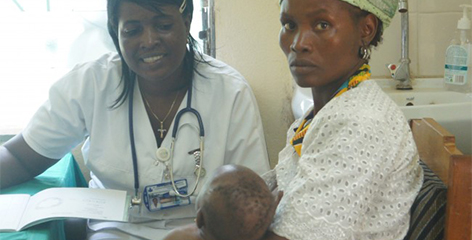 Although 11 years have passed since a peace treaty was signed between the rebels led by Charles Taylor, now awaiting trial, and the pro-governmental forces, Sierra Leone continues to be affected by the weakening of the country's structure and collapse of its institutions (OECDE). The fratricide (1991-2001) has left deep scars in a country that was already suffering. 70,000 deaths and half the population displaced is an inheritance that is difficult to manage. Nevertheless, little by little the local development structures are beginning to take over from the international organisations.

Built in 1967 and managed by a local mission, Mabenessey functions as a state hospital of reference for 120,000 inhabitants who come from some of the remotest areas of the country in very precarious conditions. Although it was occupied by the rebels, pro-governmental forces and finally UNO Pakistani soldiers who demolished part of its structure, in 2010 it had the capacity for 5,363 hospitalised people and 29,439 outpatients.

Management is completely local, nevertheless, the 134 people (six of which are doctors) who work in the hospital can count on the support, both personal and logistic, of the Hospital Sant Joan de Déu, a Catalan public centre with who they signed a brotherhood agreement with in 2005.

It is within this framework, and with the support of the Hospital Sant Joan de Déu, the Probitas Foundation financed the installation of a photovoltaic system with the capacity to generate 15.5 hours of electricity per day. The project is justified taking into account the fact that the operating room and delivery services were limited to the twelve hours that the generators were functioning. In the same way, the lack of electricity signified that many medical emergencies could not be resolved under adequate conditions.

The installation is equipped with battery chargers which means that the hospital complex can function even when there is no solar irradiance for up to three days. In addition, the fuel bill has decreased approximately 1,000 euros a month and, moreover, this kind of energetic self sufficiency does not emit greenhouse effect gases.

Given that capacity-building of the personnel is one of the objectives of the project, the Probitas Foundation also financed in 2011 Internet installation and connection for one year so that the 298 nursing students could access didactic information and establish contacts and exchanges with teaching staff and students from the nursing school of Sant Joan de Déu. In this way, the lack of teaching material and staff could be compensated for.

Other interventions included the purchase of sutures for 2010 (6,500), a photometer to carry out basic biochemistry (and thus improve diagnosis, treatment and follow-up of pathologies), improvement in the water installation and equipping of health services in various areas of the hospital, including paediatrics, wards and out-patients.