Contribute to the international protection of the refugees in Ethiopia, ensuring access to essential basic services in the camps

Probitas is collaborating with the United Nations High Commission for Refugees (UNHCR) in its project to improve the nutritional situation of children aged less than 5 years, and pregnant/ lactating mothers in five Somali and Eritrean refugee camps in Ethiopia. The aim is to contribute to the international protection mandate by ensuring basic services and bettering the nutritional situation of the children and pregnant women in the camps at Aw-Barre, Kebribeya, and Sheder in the region of Afar, and the camps of Assayita and Berahle in the region of Somali, in the east and northeast of the country, respectively. 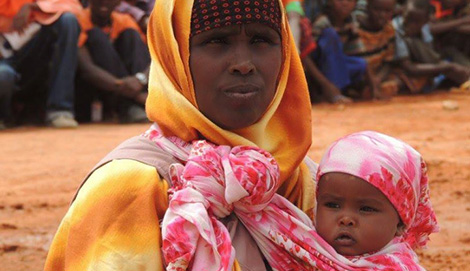 CONTEXT
Ethiopia has more than 680,000 refugees and asylum seekers coming from South Sudan (38%), Somalia (36%), Eritrea (19.5%) and Sudan (5.5%). Most of them are distributed in 23 camps around the country; it has become the country with the greatest number of refugees on the African continent.
The average figure for the prevalence of acute global malnutrition during 2012-2014 was 16.8% and 8.7% in the regions of Afar and Jijiga, respectively; whilst that of severe acute malnutrition was 3.9% and 0.8%.
PROJECT
The project developed by ACNUR centers its activity on three types of beneficiaries: on one hand, the treatment of acute malnutrition in children aged 6 to 59 months in either the stabilization centers or within the context of a therapeutic program in the camps. On the other hand, treatment with alimentary supplementation due to the scarcity of micronutrients in pregnant/lactating women will be provided. In addition to these beneficiaries, the capacities of the community health workers will be reinforced with methods to change social behavior and management. Finally, informative sessions will be held for these workers about forms of nutritional control and the promotion of good sanitary and hygienic practice.
One of the main objectives of the intervention at the grass-root level is to deal with severe malnutrition. In order to identify these cases in the community, regular visits will be paid to the homes and an exhaustive control maintained with respect to the nutritional status of the minors. In this control, methods will be applied such as the measurement of the branchial circumference, referring cases without complications to outpatient nutritional recuperation centers. In addition to a referral system for the cases, there is the distribution of therapeutic aliments such as RUFT and F75 and F100 therapeutic milk.
Another objective of the intervention is to protect, promote and support appropriate practices regarding alimentary alimentation for babies and small children: informative sessions for the population about the benefits of exclusive breastfeeding, supplementary alimentation, and adequate hygiene; practical demonstrations regarding the preparation of appropriate food based on local products and the production of enriched flour; training sessions for the community healthcare workers about changes in social behavior and the management of nutritional and health education.
The project is expected to control and improve the nutritional status of the Somali and Eritrean refugee population and, at the same time, make the refugee population of the five camps participating in the intervention aware of basic notions about nutritional and health education.
BENEFICIARIES
There are a total of 10,046 direct beneficiaries all of which are Eritrean and Somali refugees; 8,271 are children aged less than 59 months and 1,600 are pregnant/lactating women.
In addition, 57,637 indirect beneficiaries are expected of which 7,558 are aged less than 5 years and 11,667 are women. They are Eritrean and Somali refugees in the camps in the regions of Somali and the Afar camps.