Mapping of Onchocerciasis, Lymphatic Filariasis and Loiasis in continental Equatorial Guinea for the development of control and prevention strategies for these diseases.

The aim of this project is to improve the health of the Equatorial Guinean population living in the continental zone, through the diagnosis and control of onchocerciasis, lymphatic filariasis, and loiasis. To date, efforts to control onchocerciasis by the MINSABS and WHO have focused on the island area of the country, as it is historically considered an hyperendemic area for onchocerciasis. 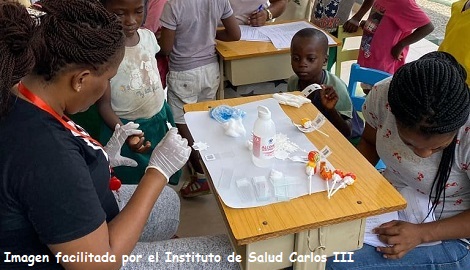 Unitary presidential republic governed by the Constitution of Equatorial Guinea, approved on October 12, 1982. The President of the Republic is the Head of State, Equatorial Guinea has evolved in recent years towards greater involvement in international affairs, especially in Africa. , is a member of the United Nations and most of its specialized agencies.

• Evaluate the usefulness of Ov16 / FTS rapid test, serological markers, loop-mediated isothermal amplification (LAMP) method, and real-time Loa-PCR for detection of onchocerciasis and FL to guide program decisions on treatment and surveillance. of these diseases.

• Treated 100% of those positive for oncocerosis, and / or lymphatic filariasis and / or loiasis.

• The laboratory is equipped with a LAMP and reagents

• Preparation of protocols and standard operating procedures (POEs). The protocol and the relevant POEs will be elaborated in the ISCIII, always in collaboration and under the supervision of the Director of the National Plan to Fight Onchocerciasis of the MINSABS.

• Purchase and transportation of the material. In parallel, the inventory will be purchased (including equipment and supplies) and shipped to Equatorial Guinea.

• Training of local staff who will be part of the work teams. At the beginning of the field work, training will be carried out for the local personnel, both the interviewers and the laboratory technicians.

• Field work. After a period of piloting, field work will be carried out in the selected communities of the four provinces that make up the continental zone of Equatorial Guinea, including conducting the LAMP in a subsample.

• Evaluation of the field work and presentation of the first semi-annual follow-up report to the Probitas Foundation, which will summarize the activities carried out to date and the results obtained.

• Data analysis and laboratory analysis. The surveys and the results of the rapid test and the serological and molecular analysis of the samples will be analyzed, as well as the reading of the microscopy.

• Preparation of report and recommendations for MINSABS. Based on the results obtained and following the recommendations of the WHO, a report will be prepared and presented at MINSABS and the pertinent control strategies will be designed.

• Final evaluation of the project. A final monitoring and project closure report will be made respectively. The LAMP team will be donated to MINSABS. Evaluation report.

Phases of the project

According to WHO recommendations, this project has two phases, although the requested and provided financing only covers the first phase. The phases are described below.

Phase 2. Study in communities selected in a random and systematic way.

• They have been previously defined by APOC as a sentinel community.

If a community exceeds 2% seropositivity to onchocerciasis, initiation of mass administration of medication (AMM) will be recommended in that evaluation unit (the AMM strategy will be defined based on the levels of Loasis identified). If rapid diagnostic test (TDR) results do not indicate transmission, additional ELISA tests should be performed to confirm the final seroprevalence below the provisional 2% prevalence.

Phase 2 (not funded in this project) will be carried out if the seroprevalence in the frontline villages is less than 2% by the TDR and ELISA methods. In this phase, a new evaluation should be carried out based on a larger random sample (30 communities per district). For this, a list of communities will be prepared according to the suspected risk. From this list, 30 communities with probability proportional to the estimated size (PPES) will be randomly selected. In each community, approximately 50 adults (over 20 years old) will be randomly selected to participate in the survey; ~ 1,500 adults per district.

If the TDR and ELISA results of the random sample of 30 villages are again below 2%, then the AMM is not recommended. If the threshold for starting the AMM is raised based on data collected during the initial phase of the investigation, programs can stop the AMM in assessment units that have not exceeded the new threshold. It has been verified that the sample size with the 30 groups approach would be sufficient to detect seroprevalence at the evaluation unit level.

In each community, between 75 and 100 participants will be randomly selected. People who test positive for onchocerciasis, lymphatic filariasis, and / or loiasis will receive treatment according to national guidelines.

The results of this project will guide the interventions that MINSABS will carry out after the study, specifically the distribution of ivermectin and / or albendazole, depending on the prevalence of onchocerciasis and loiasis that are found.

These massive treatment distribution campaigns will be carried out for the entire continental area, so the indirect beneficiaries will be the entire population of this part of the country (882,747 according to data from the last census carried out in 2015).