The Probitas Foundation supports UNHCR's work to protect refugees from malaria in Nigeria.

This project is being carried out in Nigeria, in an area near the border with Cameroon, where people fleeing the country are established due to the conflict situation they are living. The objective of the project is to contribute to the reduction of the prevalence and morbidity rates of malaria in two settlements especially affected by the disease 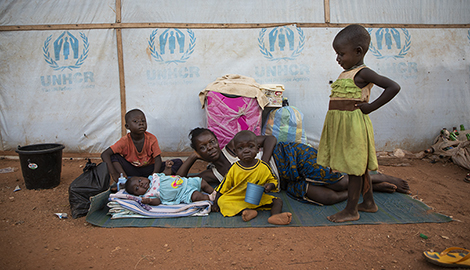 UNHCR will work on this project in Nigeria, specifically in the settlements of Anyake, Kwande region in Benue state, and Adagom, Ogoja region in Cross River state.According to data from February 28, 2019, a total of 7,236 Cameroonian refugees lived in the Adagom settlement, while 1,763 were in Anyake's. The number of children under 18 is 4,680, and the number of women and girls 5,040.Nigeria contributes to statistics 19% of deaths from malaria worldwide. While in the areas with the presence of a Cameroonian refugee population, its prevalence among children under 5 years of age is one of the highest in the country with 49.4%.

Socio political and health situation: According to IDH of UNDP 2018, in Nigeria 349 people in every 1,000 are at risk of contracting malaria.The National Strategic Plan against Malaria of the Nigerian Government 2014-2020, of which it is part of this project, is integrated into the HERAMS (Health Resources Availability Monitoring System). UNHCR Nigeria works closely with the Government health services in the host communities adjacent to the Cameroonian refugee settlements, to ensure their attention in the national health system.

General objective of the project:

Contribute to the process of international protection of Cameroonian refugees in Nigeria, ensuring a healthy life and the well-being of the refugee population and host communities.

Contribute to the reduction of the prevalence rates of malaria and morbidity in the Anyake settlement in the state of Benue and in the Adagom settlement in the state of Cross River, in Nigeria, improving the diagnostic and treatment capacity for 2,000 refugees Cameroon's problems in both settlements and strengthening access to preventive health in the field of malaria for these Cameroonian and Nigerian host communities.

- Provision of essential basic medicines and medical and laboratory supplies for the diagnosis and treatment of malaria in health centers near the Anyake and Adagom refugee settlements.

- Training of shelters belonging to health committees in the 2 intervention settlements.

- Training of health personnel in health centers close to the 2 intervention settlements.

- Conduct of health education sessions among refugees and Nigerian communities in the project intervention areas.

Indirectly benefited are 4,000 people residing in the host communities, close to the settlements of Anyake and Adagom, who benefit from the improvements of their communities in access to malaria treatment and prevention.or the conflict situation they are living. The objective of the project is to contribute to the reduction of the prevalence rates of malaria and morbidity in two settlements especially punished by the disease.