A co-operative project for ophthalmologic development in Senegal. Gesta

Through an agreement of collaboration with Gesta, the entity will treat 1,000 patients suffering from acquired or pathological blindness with surgical interventions during 2015.
From 2012 Gesta has been carrying out these interventions with a mobile operating theatre equipped and donated by the Probitas Foundation. The surgical conditions of the patients have substantially improved and, moreover, it has been possible to exchange professional knowledge in a rationally structured space which facilitates the amplification of the training and in situ practice of the Senegalese nurses. 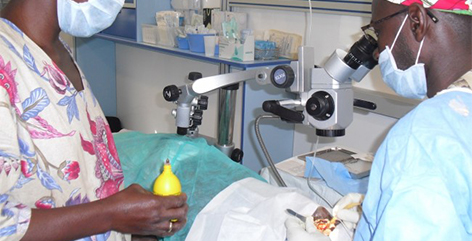 One month before the interventions the ophthalmologic technicians in the zones are responsible for selecting the patients for the campaign by travelling to the populations and making radio broadcasts. The activity counts on the support and collaboration of the Health Ministry and the health centers at Kedougou and Bakel.

Ocular diseases are very frequent and varied in Senegal with irreversible blindness representing one of the most serious socio-economic repercussions.

Every year a large number of supplementary cataracts appear, only half are operated on – the other half are on the waiting list which signifies that this pathology is a serious public health problem.

In the rural populations, where income is very low, the situation is even more complex as access to healthcare is restricted. With respect to ophthalmology, access is even more limited as there are only 58 ophthalmologists in Senegal most of whom are to be found in the big cities.

Such a situation generates a series of problems which the campaigns held by Gesta try to solve:

The Senegalese Ministry of Health is looking for a way to train nursing professionals so that small ophthalmologic consultations can be opened in healthcare centers all around the country. These technicians could attend those populations that, because of the distances involved, cannot access basic ocular care.
After having realized that there were serious ocular problems in the regions of Kedougou and Bakel, Gesta organized a campaign for the detection of operable cases with the support of an ocular care technician from the healthcare center at Kedougou with the principal objective of operating cataracts that lead to blindness.