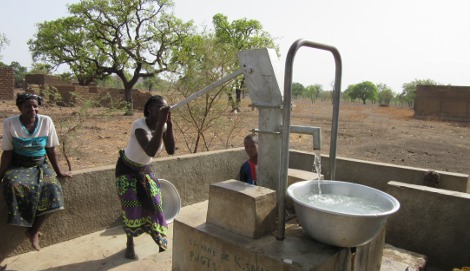 Burkina Faso is one of the poorest countries in the world, rated 181 out of 187, due to the mismanagement of its natural resources (inadequate exploitation practices), climatic risks (droughts and floods), the erosion of forests and topsoil, and deforestation.

Access to drinking water for the population in the rural areas is 56.63%, and only 6% have access to some kind of basic sewerage system. Direct dumping of domestic waste water into the environment, and the filtration of effluents from septic tanks and cesspits to the aquifers, are often the cause of serious health problems.

Diarrhea resulting from drinking water contaminated by this type of dumping is currently the second cause of infant mortality in the country: it is calculated to represent more than 20,000 deaths a year. It also has a significant impact on the prevalence of mortality associated with pneumonia and malnutrition. Such problems later affect low performance and drop-outs from school, which are 7-15 kilometers away. The situation is made worse by the impossibility to access healthcare due to its high cost and distance, 10-15 kilometers from the communities.

The project aims to guarantee the access of 4 rural communities in the municipalities of Bobo Dioulasso and Léna to drinking water and basic sewerage facilities. Thus improving the health and hygiene conditions of the population and, additionally, strengthening the role of the women by diminishing her work load and bettering her role with respect to decision-making in the communities.

Execution of the project consists in the renovation and start-up of the four drinking water wells that are currently out of order. These wells will supply water to 3,700 people. In order to ensure their correct functioning Water Management Committees will be created to guarantee the correct use of the wells and the sustainable management of the water. In addition, 20 domestic latrines in the communities will be constructed and awareness workshops held to guarantee their correct use.

Finally, with the aim of strengthening the role of the women in decision-making in the communities, awareness workshops will be held with the village authorities, and women's associations reinforced with empowerment workshops. In addition, awareness workshops will be performed in the communities about health and hygiene so as to decrease the illnesses caused by incorrect hygienic habits in the population.

The direct beneficiaries of the project are the communities of Tabana, Yèrèwe, Sogossagasso and Koundimi, with a total of 3,700 people, 1,998 of them women and 1,665 children.